—————–
I had a noodle lunch with my friends the other day. The meal was buckwheat noodles, which in Japan are called ‘Soba’.

You may not have heard of Soba noodles, but they are one of our favorite dishes.

Something which makes Soba particularly interesting is that there are many different ways of eating them. The ‘Zaru Soba’ shown in the photo below is served cold and the noodles dipped in ‘dashi’ sauce before eating. This ‘dashi’ sauce is made by boiling dried bonito flakes and sea kelp (think seaweed) in water. 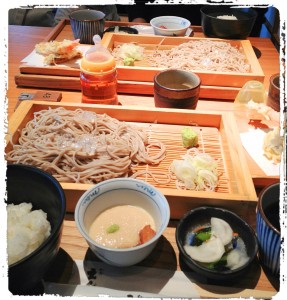 And, you may be surprised but we ‘slurp’ when we eat the noodles! Yes, making noise while you eat may be considered bad-manners in other countries but certainly not in Japan.
Slurping noodles is a way of expressing how tasty the dish is, and, believe it or not, slurping allows you to enjoy the noodles even more.

Soba are served not only cold but also boiled in a warm soup. Noodles in warm broth topped with tempura (crispy deep-fried prawns and vegetables), or Duck Meat are particularly well known.

On New Year’s Eve, we eat ‘Toshikoshi Soba’. ‘Toshikoshi’ literally means ‘passing the year’. And, since soba are easier to cut than other noodles, eating them on the last day of the year symbolizes ‘cutting the past year’s misfortune, rather than carrying it over into the New Year. 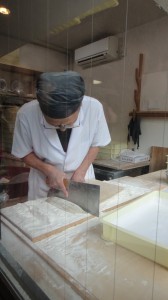 In some regions of Japan, people moving into a new neighborhood present their new neighbors with soba noodles. By presenting something ‘long’, people show that they hope to enjoy a ‘long’ and good relationship.

If you’re in Japan, you may come across ‘Tachigui’ Soba (literally, ‘eating-standing-up’ soba) stands, where you can very simply order Soba, and eat them while standing at the counter. Tachigui soba stands can be found at many Japanese train stations, and are cheap and tasty – Japan’s very own ‘fast food’.

In front of some restaurants, you can see noodles being made in a show-window, with the noodles served in authentic Japanese rooms inside.

And in the countryside, where the natural water is pure, there are places where visitors can make and eat their own soba.

One important thing that you have to be aware of, however, is that buckwheat can induce a severe allergic reaction. Also, vegetarians may not prefer noodles served in dashi, since as described above, the soup usually contains fish stock.

But, if allergies and fish-stock aren’t a concern, I highly recommend you to try soba! And even slurping!!