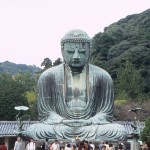 Just 1 hour car journey from Tokyo, Kamakura was once a political center of Japan in 12th century when a shogun (Yoritomo Minamoto) seized the political power and established his shogunate government, a place away from Kyoto (the capital of Japan in those days) to escape from the corrupt Imperial Court. The town is enclosed on three sides by wooden hills and even the fourth side faces the ocean.

Today Kamakura is a small charming town with many Buddhist temples and Shinto Shrines. Kamakura Great Buddha (Bronze Statue) is amongst the popular things to see. 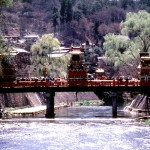 Takayama is a small town in the moutains in Gifu prefecture (very center of main island) and is surrounded by 3,000m(10,000 ft) peaks, thus people coming to Takayama always enjoy stunning view on their way by trains or buses. The town was founded in the 16th century and developed their traditional architecture, arts and crafts which are all well preserved due to the inconvenient location and isolation. Takayama is also famous for high quality timber and highly skilled carpenters.  The Takayama festival (held in spring and autumn)with colorful floats is one of the best festivals in Japan.

On the northwest coast of Honshu (main island), Kanazawa is a castle town with just under half million residents. The city used to serve as the seat of the Maeda Clan, the second most powerful feudal clan after Tokugawa based in Edo (Tokyo) in terms of rice production and the fief size. The Maeda Clan promoted arts and crafts, such as lacquer ware, silk dyeing, potteries, etc.

During World War II, Kanazawa was the 2nd largest city after Kyoto with many people escaping from bombings and some parts of the town have been left intact such as geisha quarters, samurai mansions, etc.

Today people come to Kanazawa mainly to visit Kenrokuen Garden, one of the best gardens in Japan, but there are a few fine museums and private gardens which are also worth visiting. In the very early stage of Japanese history, a capital was moved every time an emperor died and a new emperor came to the throne because the place with someone having died was considered “unclean”. With the surrounding countries developing steadily, however, it became necessary for Japan to build a permanent capital, and Nara was chosen as the 1st “permanent” capital of Japan in 710 and the capital lasted till 784. Today there you can still find many historical buildings which remain intact including some of Japan’s oldest temples as well as Great Buddha (bronze cast) and free-roamig deer on spacious green parks.